Express gratitude to people around you! 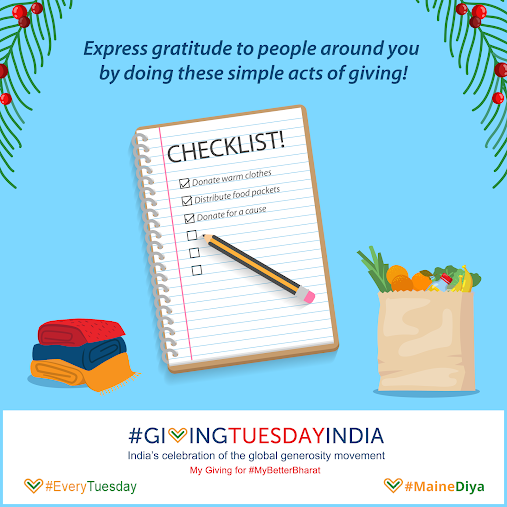 It’s been a difficult year, but aren’t you one of the luckier ones to be getting ready to welcome the new year?
With just a few days to go until the end of the year, this Tuesday do an act of kindness and express gratitude. Donate warm clothes, footwear, or food packets to the needy, donate online to a cause close to your heart - there's a lot you can do!

A little kindness goes a long way in lifting the spirits of people around you! Let’s see out this year with a wave of kindness!
For more ideas visit: https://www.givingtuesdayindia.org/every-tuesday
#EveryTuesday#MaineDiya#Click2Give#GivingTuesdayIndia

If you wish to see more ideas for doing random acts of kindness, visit

Posted by #GivingTuesdayIndia at 23:06 No comments:

Express gratitude to your elders! 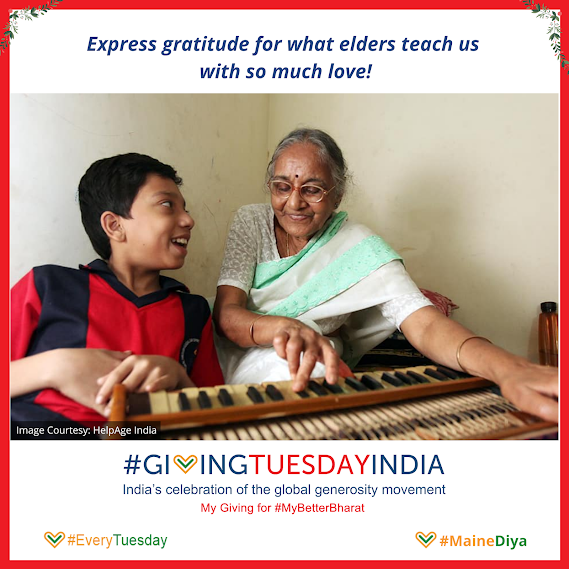 From playing the harmonium to reading us stories at bedtime, from helping us learn how to walk to teaching us about life's myriad things - our elders have always stood by us and helped us learn with a lot of love and care. From the time we are kids till we grow up, their love for us never wanes and they remain our teachers for life - unconditionally always making us better persons.
This Tuesday, express gratitude to the elders around you for making you who you are and helping you through life's ups and downs! You can also tick off a task on our #KindnessBingoChallenge!
Check out the complete #KindnessBingoChallenge here:https://www.givingtuesdayindia.org/every_tuesday/1184
#EveryTuesday
#MaineDiya
#GivingTuesdayIndia

Posted by #GivingTuesdayIndia at 22:50 No comments: 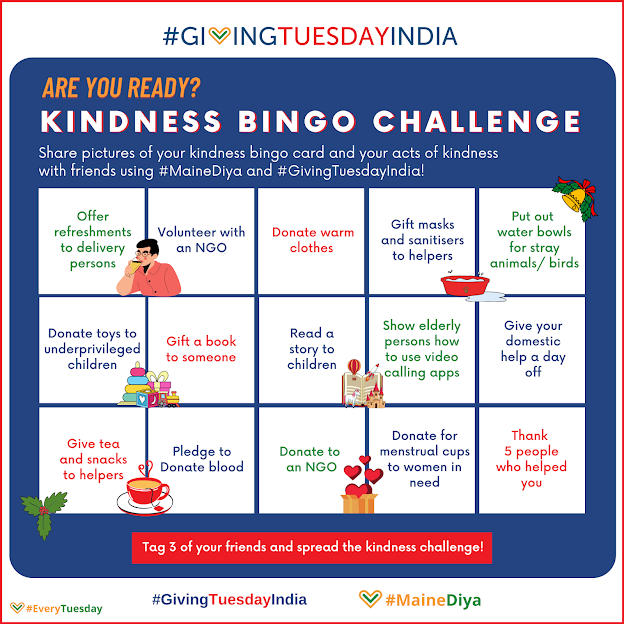 Want to participate in our kindness bingo challenge and complete all these random acts of kindness to express your gratitude to the people around you before 2020 ends!
The first 5 people completing these following things will be invited to our Facebook Live with an international panel and get an e-certificate:
1) Fastest Any Five
2) All 4 Corners
3) Top Line
4) Middle Line
5) Bottom Line
Tag and share this with your friends and complete the #BingoKindnessChallenge!
#MaineDiya
#EveryTuesday
#GivingTuesdayIndia
#KindnessChallenge

Posted by #GivingTuesdayIndia at 06:19 No comments:

We are dedicating this month to YOU! 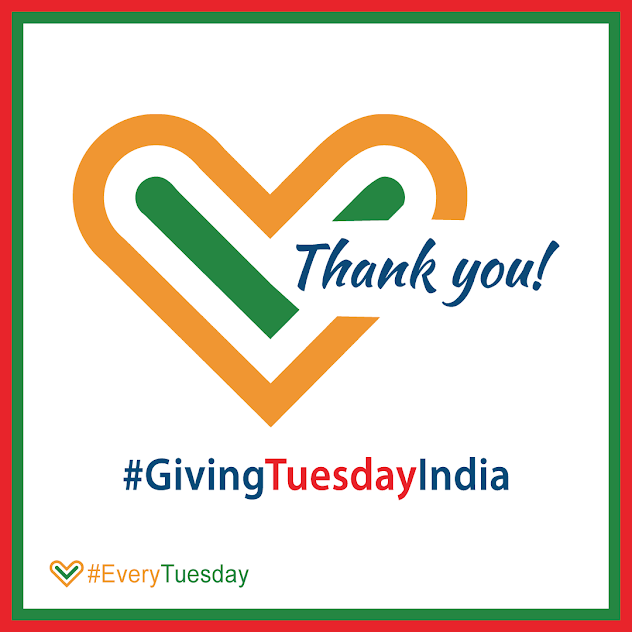 This Tuesday, join us in doing a random act of kindness - expressing gratitude. We give our heartfelt thanks to all the wonderful people who celebrated GivingTuesday India during DaanUtsav.
You graciously and generously opened your hearts, homes and your wallets, and spread kindness and joy all around! You donated to various causes and helped so many NGOs, you volunteered your time and skills to make websites, teach children, and engaged in so many other activities!
𝗬𝗢𝗨 - made GivingTuesday India possible and we are dedicating this month to celebrating you and your kindness!
For ideas, visit: https://www.givingtuesdayindia.org/every-tuesday
#Click2Give
#RandomActsOfKindness
#EveryTuesday
#GivingTuesdayIndia
My Giving for #MyBetterBharat

Posted by #GivingTuesdayIndia at 03:30 No comments:

You can help missing children reunite with their families! 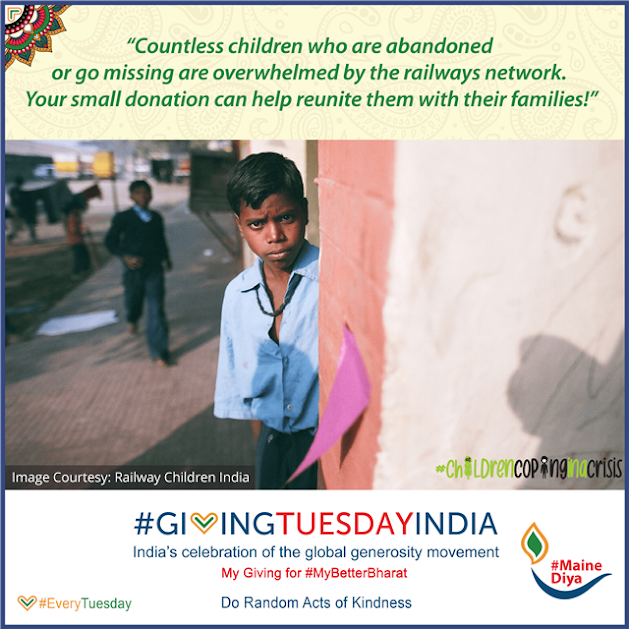 Have you wondered what causes young kids to hang around at railway stations? There are many children across India who run away from home for trivial reasons. Some children are abandoned by their guardians and some kids go missing mysteriously. These children feel totally helpless when they come face to face with the overwhelming railway network. This Tuesday let your random act of kindness could be to reunite these children with their families.
Bhibhu (age 14) ran away from home after his parents got into a fight and sought help from a friend who promised to help find his mother. His friend abandoned him halfway. Alone and scared, he was found at the Ghaziabad railway station by the team of Railway Children India, a GuideStar India Transparency Key certified NGO.
He was taken to a shelter home for safekeeping but, poor Bhibhu completely scared out of his wits with this terrifying ordeal couldn't even speak to anyone. Not even the very people who were trying to help him. With Bhibhu unable to communicate it was impossible to locate his family.
But the team at Railway Children India was undeterred. Through repeated counselling sessions with a speech therapist, Bhibhu was slowly and surely getting his confidence back! He was finally able to speak, exercise his facial muscles, and show emotions and give some details about the whereabouts of his family!
After 6 long and lonely months, Bhibhu finally spoke to his overjoyed parents who got back their son! But they still remain to be together because of lockdown restrictions and COVID-19.
Bhibhu was fortunate to have landed in the arms of Railway Children India and not the many evils and pitfalls that await unfortunate children who fall into the black hole of the railways' network. Beggar mafia, drugs, pickpocketing, and thieving, and many other such lives are ready to grab these vulnerable children.
Your small donation can help Railway Children India to seek out countless Bhibhus who find their way into the pitfalls of the harsh life on the tracks and stations of the vast railway network in India. Say #MaineDiya and help children like Bhibhu make their way to the safety of their families.
#Click2Give: https://www.givingtuesdayindia.org/story-details/1169
#EveryTuesday
#RandomActsofKindness
My Giving for #MyBetterBharat
#GivingTuesdayIndia

Posted by #GivingTuesdayIndia at 20:30 No comments:

Spread kindness among the less fortunate and put a smile on their faces! 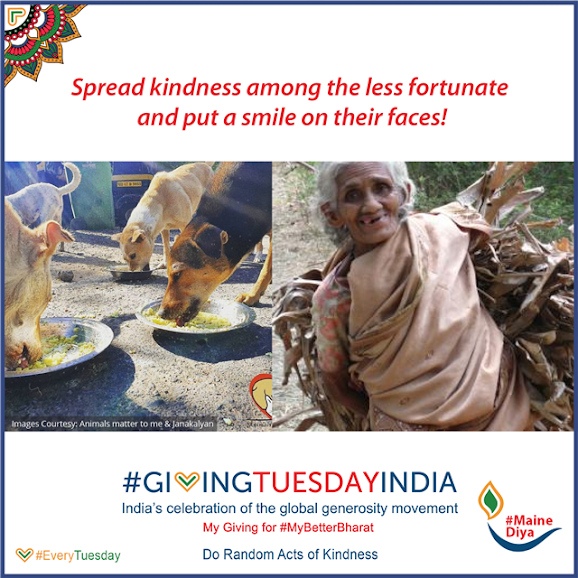 This week Rohit Thukral reminisces with us about his #MyGivingStory as a young child during Diwali.
Rohit firmly believes that happiness lies in helping the people around us and not in the pursuit of money. He is deeply saddened in the misconception that many people hold - more money equals more happiness. He hopes that his story can help spark something in all of us to be a little more compassionate and spread kindness.
Rohit was a young 16-year-old boy enjoying the sights and sounds of Diwali - the festival of light. While he did see the light in children bursting crackers and adults having their own fun he also saw the oft-overlooked darkness - street dogs scared by the loud sounds of the crackers and the less fortunate people on the streets barely able to get a meal. This dichotomy of a festival that was supposed to bring joy and happiness to everyone really touched him and sparked something in him.
Young Rohit, immediately ran back to his house and broke open his piggy bank in which he had been saving money for a long time. He used this money to buy some food for the needy outside his house and the dogs. He went and fed them and spent time with them and learned of their troubles and lent them an ear. Young Rohit's act of generosity helped shape him as a human being. He was able to sympathize with the people around him, and that has stayed with him till today. We are really heartened by his selflessness and kindness towards not only his fellow humans but animals as well.
Rohit has an important message for all of us. Festivals, he says, are about spreading happiness. And no amount of bursting crackers (that only cause pollution) or buying new things will give you the satisfaction that helping people will. So go out and spread kindness among the less fortunate and put a smile on their faces!
Do a random act of kindness and create sparks of joy wherever you go!
For ideas, visit: https://www.givingtuesdayindia.org/every-tuesday
#EveryTuesday
#GivingTuesdayIndia
#MaineDiya
My Giving for #MyBetterBharat
Posted by #GivingTuesdayIndia at 21:30 No comments:

This Diwali, pick gifts that will double your happiness! 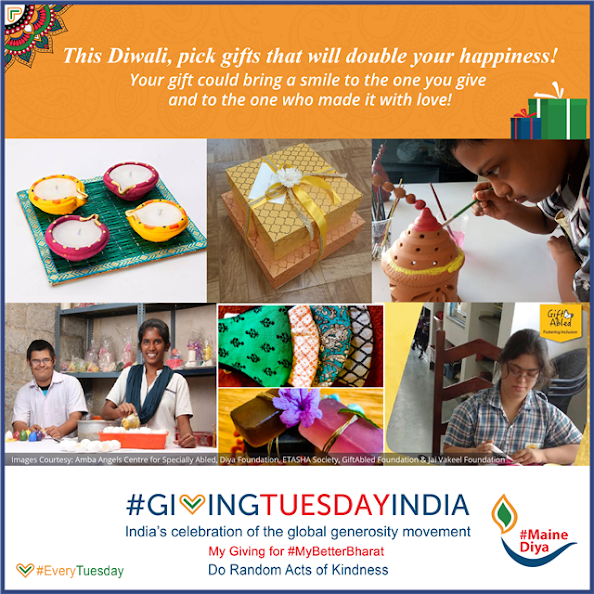 This Diwali, illuminate the lives of underprivileged artisans, craftspersons and other handicraft workers when you bring joy to your loved ones with the gift you
pick thoughtfully!
Diwali is a time of happiness and joy. We buy new clothes, diyas, lanterns, rangolis and so many other things. Most of the time we buy these products from big corporations, shopping malls and online portals. This Diwali we are asking you to make a change. A change that will positively impact the lives of people who are fighting for their basic survival. With your click you can help a father feed his children, help a mother support her children to attend online school, help someone fight their battle with a life threatening medical condition, help someone who is self-employed after losing a job, boost the confidence of an autistic adolescent mastering creative skills!
Our partner NGOs have products all across the spectrum crafted with a lot of love and attention just for you. Buying these products will help thousands of people this Diwali with means for basic survival. So shop to your heart's desire and uplift people at the same time! Buy NGO products for gifting and celebrate Diwali with your generosity! Do remember to mention #MaineDiya on your gift pack and spread the message with a pic on social media with #MaineDiya!
To learn more about the #MaineDiya gifting options, visit:
https://www.givingtuesdayindia.org/#featured-donation1
https://www.givingtuesdayindia.org/#featured-donation2
#MaineDiya
#GivingTuesdayIndia
#EveryTuesday
#Diwali
#Diwaligifts

Posted by #GivingTuesdayIndia at 07:00 No comments:

#GivingTuesdayIndia
#GivingTuesday was started in the US in 2012 to help people show their generosity after the excesses of spending on oneself during #BlackFriday and #CyberMonday. It has emerged as a strong global giving movement with leaders in 60+ countries. As a global leader of the movement, GuideStar India promotes the celebration of #GivingTuesdayIndia on the Tuesday of #DaanUtsav, India’s biggest festival of giving. After raising over Rs10 Crore in the first two years, #GivingTuesdayIndia is aiming high with collaborators comprising giving platforms, e-commerce platforms, payment platforms and corporates, who are creating fantastic opportunities for their consumers, employees and associates to experience the joy in giving to trusted causes. #GivingTuesdayIndia seeks to help millions of everyday givers see how their individual contributions add up to make a big impact when they all give at the same time! We expect #GivingTuesdayIndia to significantly lift everyday giving year on year!